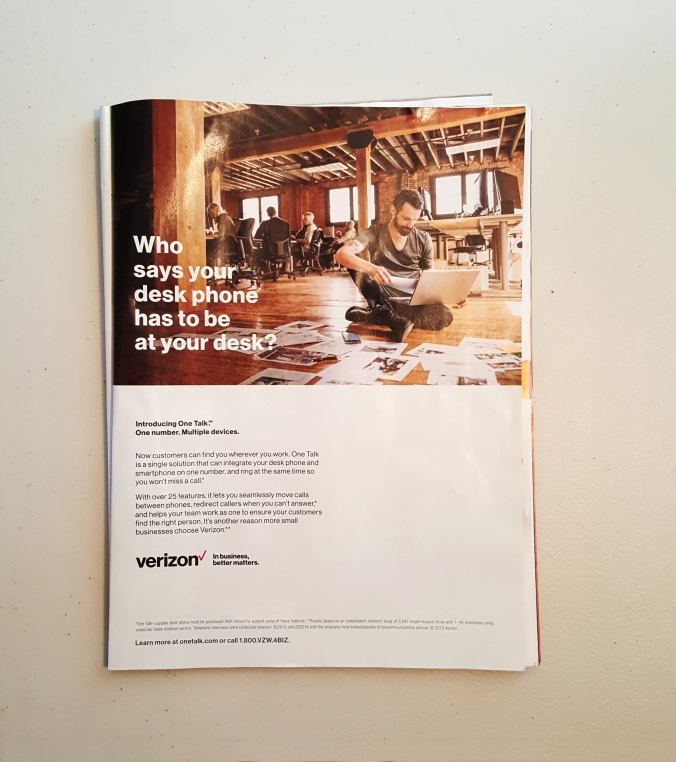 Close friends and colleagues know I’m a fan of Bloomberg Business Week. It’s the only publication I receive as a physical magazine. After dropping a signed first edition of Zadie Smith’s “White Teeth” in the bathtub, I vowed to never read anything more than a magazine while soaking. AND I SURE don’t trust myself to read an electronic device there.

Last night I was browsing through the most issue of Bloomberg and something caught my eye. It was a full-page ad for Verizon’s “One Talk” service, which lets calls to a users’ office phones, ring simultaneously on their mobiles.

Our family has had Verizon service since the early 2000s, and I’ve been partnering with Verizon for nearly four years as one of their national team of brand influencers. So I naturally pay attention to commercials and ads related to Verizon products and services. I hadn’t heard about “One Talk.”

Randomly and coincidentally, I have been experiencing my own, unrelated, “one ring” circus this year.

In my Google settings, I’ve listed all of my phone numbers, so when I am called on one of the numbers, ALL OF MY PHONES RING. It’s pretty crazy, but let me just say it’s rare for me to miss a call.

So in a way, I have simulated One Talk via Google Voice and I’ve found it to be convenient, hilarious and annoying.

It’s convenient to be able to get calls on all devices. Remember, “Call Forwarding” isn’t the same, because it only rings on the number you’re forwarding to (i.e., your mobile number).

It’s hilarious because seriously—sometimes four of my phones ring at once. Today a friend, Marianne Picha, called my original landline number (which is now on Google Project fi), and it rang all of my cell phones, including the Verizon line which was 100 miles away at our home in Randle. My husband had the phone with him at the house, and answered! (Verizon is an essential lifeline for us out there in Lewis County.)

It’s annoying because…ALL OF THE PHONES CAN RING AT THE SAME TIME. But this can be easily fixed. Just turn off the ringers on the phone(s) you don’t want to ring.

CenturyLink is an archaic system that charges separately for voice mail, call forwarding and other features. (Most phone companies include myriad features as part of the service.) We had three landlines — one for my husband, one for me and one for our dedicated fax line. It was very costly.

A few years ago I moved the fax line over to Comcast to quality for a “triple play” pricing plan. And as our landline costs continued to skyrocket, I realized we needed to prune another CenturyLink line.

Last year I decided to move my 38-year-long phone service away from Centurylink to Google’s Projectfi. The Projectfi service required me to buy a Nexus phone (in my case, a 6P). Last November, this phone came with a $499 price tag.

The Nexus 6P is a fabulous phone. The camera is INCREDIBLE, especially in low light. And the battery seems to last forever. The best part is, since I use very little data (mostly use wifi), my phone service has averaged $28.50 per month—less than half the cost of my land line service. The Nexus 6P is now about half the price, so a great deal for people who need a phone and don’t use a lot of data. The networks providing service include T-Mobile, Sprint and U.S. Cellular, so it has expansive coverage. The downside is, the Nexus is a gigantic phone. Not heavy—just huge. No way can it fit into a pocket. ALSO, the Nexus requires a USB-Type C charging cable.

Getting back to the ad in Bloomberg, I can see the value in the OneTalk service.—especially for Verizon business customers who have would benefit from seamlessly moving between landline and mobile. And it makes it possible for a business to be nimble—offering an essential and competitive edge.

One Talk is a relatively inexpensive service (looks to be around $25/month) but it requires a compatible phone set for the landline. And according to Kagan, the landline is actually VOiP—something to think about if you’re prone to power outages.

I’m proud to participate as a member of Verizon’s social media team. My posts are about my own personal experiences.  No compensation is provided, nor are favorable comments promised. All opinions are my own.